As little break from something serious, I found this video while exploring YouTube. It is from the concert I went to at the Electric Factory in Philly in June. This is a great song from a great show by a great band. What is more fun is that I am one of the tall shadows right up in front of the guitarist Tom. Enjoy!

Google released an updated version of their Blogging platform, so in updating, I changed the template. I hope it is a positive change; at the very least it is something different. On to the books.

Focusing on the techniques used to compose the Hebrew narrative of the Old Testament, the author examines the deliberate literary artistry in the text. Alter encourages reader to approach Scripture as literature and note similarities with fiction writing in the presentation of characters and events. Techniques considered include the prominence of dialogue, stereotypical narratives, artful repetition, and the weaving together various sources into a unified narrative. Alter shows that a careful, knowledgeable reading of the text will show the skill of the ancient authors. Of note was his discussion of the prominence and the use of dialogue in telling a story and focusing the reader’s attention on the central concern. Also useful was his discussion of repetition, demonstrating it as a deliberate phenomenon and not necessarily signs of a different sources unskillfully combined. A major emphasis was the need to notice differences in repeated material or deviations from standard paradigms to discern significance in the narrative.

The feature article discussed five areas of continued need for reformation based in Calvin’s writings concerning the Reformation in his day. The five areas of concern Scripture, worship, justification, the sacraments and the church. The article took note of current streams in the wider evangelical church, and made hints at concerns within Reformed circles, in particular the Federal Vision and New Perspective and Dr. Enn’s book. The other two principle articles concerned the Catholic church and their theology in light of the Second Vatican Council and Catholicism and liberty. An article of interest also concerned the needs and place of young adults in the church and efforts made by various churches to minister to them. The book Translating Truth: The Case for Essentially Literal Bible Translation a series of articles by Grudem, Leland Rylem. Collins, Poythress and Winters received a glowing evaluation.

The articles were included in a publication from Westminster Seminary California. The lead article concerned worship with an emphasis on the regulative principle. The second article examined women’s place in ministry, where it was briefly argued that a woman can be involved in any ministry a non-ordained man is. This was an interesting article, but needed more extensive and sound argumentation. The final major article dealt with Christ in the historical books, where a forced redemptive-historical reading was applied to two historical occurrences- the apostasy of Jeroboam and Ezra’s reading of the law.

A short book exploring some narrative technique in the Old Testament. Characterization and point of view are the two primary concepts examined by the author. The latter section is particularly helpful in examining how a narrative presents a particular point of view, and may transition between several different perspectives in a narrative. The author used the book of Ruth as an illustration of the principles she outlined. The book concludes with an examination of the literary qualities of the narrative and their impact on source and form criticism.

A short article outlining the resurgence of Calvinism among the younger generations, particularly through Jonathan Edwards; the article highlights John Piper, Josh Harris, Al Mohler and Mark Dever. The discussion focuses on Calvinism in Baptist circles, with little discussion of those who are within Reformed churches, with the exception of a mention of R. C. Sproul.

An introductory book to textual criticism written at a popular level. After the author gives an overview of his personal history in Biblical studies, he examines the writing and copying practices during the period of the early church. Ehrman also offers an overview of the history of the Greek text and textual criticism. The strength of the book lies in the analysis of textual variants and the reflection of the theological and social discussions of the early church, demonstrating that intentional changes must be considered along with human error in determining the best reading.

The major events in the book centered on Caparthia’s desecration of the Temple and the protection of the Jewish Christians at Petra. David Hassid, computer expert died at Petra, while another pilot connected with the Tribulation force was killed. Chaim took on the persona of “Micah” and served as a second Moses. The actions of Caparthia are evil to the point of being comical, and the authors dispensational belief in the unique status of Jewish believers is even more pronounced in this volume.

The article examines in some depth the meaning of θεοπνευστος as used in II Timothy 3:16. Taking his starting point from a lexical entry by Dr. Hermann Cremer, Warfield examines the other occurrences of the word, especially in non-Christian usage, and its active or passive sense. Taking into account some of the text critical issues surrounding the term, Warfield argues that the term is not distinctly Christian, but was used by other authors than Paul. Warfield argues that the term also has an passive sense, expressing production from God, and not active 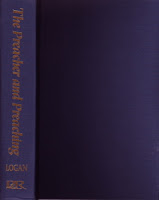 sense, inspiring in relation to God.

An article exploring the centrality of Christ in both the Old and New Testament. The author contends that God intentionally structured events in the Old Testament to point towards and find their fulfillment in the person and work of Christ. A major concern of the essay is to encourage pastors to greater engagement with the Old Testament in preaching in a Christian manner. In expressing his redemptive-historical method, he outlines his famous rectangle. The examples Clowney chooses tend to more easily lend themselves to a redemptive historical reading; while the principles he espouses are more general and difficult to apply to many Old Testament texts.

On the evening of Sunday October 28th, four Rochester area churches joined for worship on the occasion of the 489th anniversary of the Reformation. That morning, another local Rochester church turned its back on everything the Reformers stood for.

During the morning worship service, North Baptist Church invited an artist to create a chalk drawing and a sculpture of Jesus during the sermon. Below is Senior Pastor David Whiting’s explanation for this action:

It is great to have Richard here who through some visual art- it is an act of worship to him and an aid to our worship as we focus on the greatness and the glory of God and the greatness and glory of Christ…I think because of some abuses in church history art has been relegated to the back of the church; and that’s too bad, because art is a great aid to our focus and to our worship. We don’t worship art, certainly that’s not what we do. But art is a great mind-focusing, God-glorifying, physically-enhancing blessing to our worship; so thank you Richard for helping us and sharing your gifts with us. (Sermon audio for "The Centrality of the Cross and the Glory of Christ" is available at North Baptist's Website under recent messages, from which this quote was taken.)

Compared to other stunts pulled in other Evangelical churches, this is relatively minor; but the decline from a church who once placed primary emphasis on the pure preaching of the Word of God to this action is striking. Two considerations suggest themselves in response to this action.

First, this action is a blatant denial of the foundation principle of the Reformation, sola Scriptura. Scripture, and Scripture alone is the only authority to guide the church in matters of faith and practice. The application of this principle to worship is known as the regulative principle- the Bible alone determines what is acceptable in worship to God. Debate rages concerning the scope and the application of the regulative principle, but those who are committed to Biblical worship do not debate the illegitimacy of images in worship, especially of Christ. The first commandment forbids worship of any other than God, the second forbids worship in any matter and by any means not prescribed by God- forming the Scriptural basis for the regulative principle. Obedience to these commandments is the hallmark of worship passed down from the Protestant Reformation. Disobedience or disregard to these commandments lead not towards the purity envisioned and restored by the Reformation, but to the abuses of Rome.

In light of this disregard of the foundational principle of the Reformation, it is not surprising that Pastor Whiting demonstrates a parallel to the doctrine of Rome. The pathetic knowledge which most current pastors and church leaders have not only of the Bible and sound doctrine, but also of church history is a sure explanation of the repetition of the mistakes of the past. The Second Council of Nicea concerned itself with the issue of idolatry and images in church, and reached the wrong conclusion. The decision of this council formed the basis of the abuses in worship the Reformers objected to, and the doctrine of the current Catholic Church. Consider the following two quotes from the Catechism of the Catholic Church:

1162 “The beauty of the images moves me to contemplation, as a meadow delights the eyes and subtly infuses the soul with the glory of God." Similarly, the contemplation of sacred icons, united with meditation on the Word of God and the singing of liturgical hymns, enters into the harmony of the signs of celebration so that the mystery celebrated is imprinted in the heart's memory and is then expressed in the new life of the faithful.

2132 The Christian veneration of images is not contrary to the first commandment which proscribes idols. Indeed, "the honor rendered to an image passes to its prototype," and "whoever venerates an image venerates the person portrayed in it." The honor paid to sacred images is a "respectful veneration," not the adoration due to God alone: Religious worship is not directed to images in themselves, considered as mere things, but under their distinctive aspect as images leading us on to God incarnate. The movement toward the image does not terminate in it as image, but tends toward that whose image it is.

Pastor Whiting said the work of the artist served as a act of the artist’s worship, and an aid to the congregation’s worship. Consider the similarity of this with the first (1162) statement from the Catholic Catechism. Images of Christ serve as a means towards worship in conjunction with those means which find approval in Scripture. No serious, doctrinally informed Catholic would affirm that worship is offered to images, but only “respectful adoration.” The use of art according to official Catholic teaching is to aid in focusing the mind on the true object(s) of worship. Isn’t this exactly how Pastor Whiting defended this action, denying that worship was offered to art, but that is served as a “great mind-focusing, God-glorifying, physically-enhancing blessing to our worship?” What is most disturbing is his calling the traditional Protestant and Biblical positions on visual art in worship as an “abuse of history.” The Second Council of Nicea mandated that every church contain images of Christ and of the saints, and aside from images of the saints, and the movement to counteract this error constitutes an abuse. In so doing, it turns its back on the Reformation, and sets its trajectory straight for Rome, away from Wittenburg or Geneva. May God have mercy and return this church to faithfulness and continued reform.
Posted by Keith at 7:01 PM No comments: