I will be spending the next three months teaching Hebrews, so I plan to write about some interesting thoughts and insights which occur during my study. But before I get to more serious topics, something bugs me about the NFL season opener that I have to get off my chest.

The game is going to be great, the Colts vs. the Saints. But what concerns me is the entertainment, John Mellencamp and Hinder are playing, I am not a fan of either, but neither is a big deal. It is the other two artists which I don't get. Faith Hill and Kelly Clarkson. I always considered football to be the most masculine of the major sports (you don't ever hear about a WNFL) and I can't imagine the latter two performers fitting well with the typical NFL audience. Even if maybe Faith Hill has some appeal, whether for her looks or those NFL fans who enjoy country, what place does an American Idol contestant have there? Whoever planned the entertainment at the game would be better booking the next Teen Choice Awards, but should be banned from the NFL.
Posted by Keith at 6:37 PM No comments: 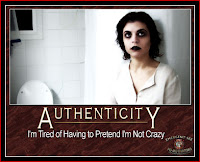 A friend sent me a link to a series of posters parodying the Emergent Church Movement. This was the second time I had seen the site, and it reinforced a concern I initially felt. Most of the posters poked fun at some legitimate concerns raised over the movement, but I believe several strayed beyond the discussions with the movement and attacked individuals drawn to the Emergent Church.

Stereotypically, many young adults standing on society’s fringes are drawn to an Emergent Church, while few traditional, Reformed churches are having measurable success reaching out to those with tattoos and piercings. Rather than begrudge the Emergent Church’s success, we should rejoice that these individuals have found a place within the kingdom. 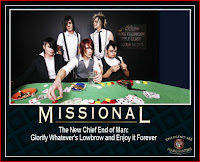 Further, since some significant concerns surrounding this movement, we must mourn for those whose growth is hindered because of these weaknesses. What we must never be guilty of doing is alienating these individuals by our biases. They have enough to struggle with in finding a place in the predominantly white, middle-class environment of a Reformed church; they should never struggle against our cultural prejudices. It would never be acceptable to satire a Pentecostal church by belittling the predominant minority makeup of those communions, or to mock a mission church because those drawn to it make not have showered or shaved in several days; how is appropriate here?

I will not judge whether satire has a place within serious theological discussion, but this type of ad hominem attacks never has a place.
Posted by Keith at 10:04 AM No comments:

So it has been a while since have posted anything, but other necessary tasks have been demanding my time and attention. I have also been trying to figure out what direction I want the blog to go. I am suffering from a serious famine of ideas for what to write about. But, some ideas have been coalescing recently, which might pump some more life from my end into the blog. No promises through for any improvement on my sporadic postings; at the very least, here is an update on what I have been reading in the past couple months; I know it is pathetic, but I have been really busy.

· A History of the Synoptic Problem- David Laird Dungan, 1999.

Dungan presents a comprehensive overview of synoptic studies throughout the history of the church. Beginning in the early church, Dungan identifies three forms of dealing with the differences in the synoptic gospels. Each form deals in some form with four issues, canon, composition, text and interpretation. The early church demonstrated two different approaches, that of Origin and that of Augustine. Origin, living before the final exclusion of all gospels except four, took notice of other gospels, even while granting preference to the four received ones, and paid attention to the varying texts in existence. What is distinctive about Origin’s approach was his consistent spiritual explanation for the differences between the gospels. Augustine, lacked discussion of the issues surrounding canon, since that had been settled, and of textual issues. His approach was one of harmonization, an approach followed today by many fundamentalists. The philosophical groundwork for the third, modern form of the synoptic problem was laid in the philosophy of Spinoza and Locke. Spinoza sought to bury Biblical interpretation behind a mass of historical questions, thus bringing traditional orthodoxy into doubt. Locke sought to promote the philosophical groundwork for a democratic society by making all equal in theological matters, answerable only to their own consciences. Along with the philosophical changes textual criticism caused a major revolution in synoptic problems. Based on these significant changes, modern synoptic studies have focused more on the composition of the gospels, without being tied to traditional orthodox theology. The book concludes with current trends in refining or questioning the current two source hypothesis and its assumption of Marcan priority and Q. While the discussion of Spinoza seemed unnecessarily long, the outlining of the background to modern thought was helpful. The outline of textual criticism in relation to the textus receptus was interesting. Especially insightful was the anti-Jewish and anti-Catholic sentiment lying behind the traditional modern synoptic solution.

The lead article features profiles of several OPC summer camps. Clawson wrote an insightful article on Christians as Christ’s servants, arguing that Christian freedom is defined by service to Christ and others. Trueman offers a critical review of Olson’s book on Arminian theology. The strength of the review lay in the historical inaccuracies of many of Olson’s claims. Dr. Gaffin responded to the use of one of his statements in support of Wright’s defense of the Trinity to question Wright’s orthodoxy not only regarding the Trinity but the person Christ and his Messianic self-consciousness. Shorter reviews were offered on McGoldrick’s book on ancient heresies and Piper’s book on fighting for the truth featuring sketches of Athanasius. Owen and Machen.

Second volume in the Christian Traditions series covering the development of Eastern Orthodox theology. Pelikan is clear that the orthodox system does not see itself as one for innovation or novelty, yet even the conservative theology offers much unique insight and development. The opening chapter outlines the conservative attitude with respect to the fathers. The volume covers the important contributions of orthodoxy to the development of Christology in response to monophysite and monotheleite heresies. Attention was also focused on the iconoclastic debates and the debates with the Latin church. Debates with the West, both Catholic and Protestant, forced the church to define its disincentives more clearly, The more direct relation the East had with Judaism and Islam was noted, with their reliance on orthodox Trinitarian theology to challenge both. Interesting was the discussion regarding the filoque and the Eastern defense and lingusitic concessions to the West.

Covering the period following Antiochus Epiphanies through his capture by the Roman Vespasian, Josephus outlines the history of the Jews. The section covering the rise and reign of Herod was detailed and informative. The long history of revolts and disturbances in Jewish history was helpful in providing context for the decisive outbreak of the Jewish war. Also interesting was the causes of the revolt and the many occasions offered for a peaceful resolution.

The feature articles revolve around the delayed attempt of the Seventy-Forth General Assembly to adopt a New Directory for Public Worship. The lead article describes the history of the DPW in the Presbyterian tradition and in the OPC, and the process thus far in the OPC’s history. Hart and Muether evaluate the worship practices in a largely descriptive survey. The biases of the authors were apparent throughout the article however. Wilson and Wallace both offer articles describing the goal and the biblical pattern of worship, while both indulging in the false dichotomy regarding form and content. Other articles offered a glimpse at a now disbanded outreach in a maximum security prison in Maryland. A longer tribute to Dr. Kline was published in this article. VanDrunen’s A Biblical Case for Natural Law was reviewed, and the author was given opportunity to respond to the criticism leveled against his book.

This book introduced a basic method for composing an expository, redemptive message. The text is clearly founded on the conviction that the text must be central to the sermon, and Christ must be central to the text. Focusing on how to find Christ in the text, Chapell sets forth the Fallen Condition Focus found in every text which points to the redemptive answer found in Christ’s person and work. While offering much helpful information on classification and the mechanics of sermon preparation and components, the major focus is on understanding the propriety and goal of the methods, rather than presenting a step-by-step how to preach. The basic components of a sermon are discussed in greater depth. The discussion of illustration was helpful, but the limitation of full illustrations to developed stories tends to overlook other illustrative methods which need discussion. The final major division of the book discussing the redemptive-historical sermons is a careful and balanced presentation of the rationale and criteria for a truly Christ-centered sermon.

Modern theories and practices regarding the synoptic gospels relationship and composition are discussed in this introductory book. The book is divided into three primary sections, the largest discussing synoptic criticism, then form criticism and finally redaction criticism. On the whole, the book is helpful in clearly setting forth the basic theories and evidence behind the theories. The largest section discussing the modern form of the synoptic theory clearly sets forth the evidence and why some of the weaknesses. He is careful to note at many points that the modern synoptic theory is based on the accumulated weight of evidence. While the discussion of the priority of Mark was clear, at times the relationship between Matthew and Luke agreements against Mark was harder to grasp. The discussion of redaction criticism was especially helpful in practically thinking through the composition of each unique gospel narrative. Any discussion of the synoptic problem raises issues that require attention in the doctrine of Scripture, and point to the inadequacy of many current formulations in taking seriously the date found in the synoptic gospels.
Posted by Keith at 9:10 PM 3 comments: